View cart “BANNERTAIL” has been added to your cart. 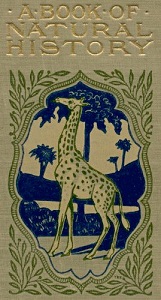 A Book of Natural History

This volume is made up from the writings of naturalists who have told us of the behavior of animals as they have seen it at first hand and of the beginnings and the growth of life so far as they know about it. In selecting these from the wealth of available material the editor has been guided by this rule: The subject matter must be interesting to young people; it must be told in a clear and attractive style; and most important of all, it must deal with actualities. We have seen in the last few years a marked revival of nature studies. This has led to a wider range of interest in natural phenomena and in the growth and ways of animals and plants. If this movement is not to be merely a passing fad, the element of truthfulness must be constantly insisted upon. If a clever imagination, or worse, sentimental symbolism, be substituted for the truth of nature, the value of such studies is altogether lost. The essence of character-building lies in action. The chief value of nature study in character building is that, like life itself, it deals with realities. One must in life make his own observations, frame his own inductions, and apply them in action as he goes along. The habit of finding out the best thing to do next and then doing it is the basis of character. Nature-study, if it be genuine, is essentially doing. To deal with truth is necessary, if we are to know truth when we see it in action. The rocks and shells, the frogs and lilies, always tell the absolute truth. Every leaf on the tree is an original document in botany. When a thousand are used or used up, the archives of Nature are just as full as ever. By the study of realities wisdom is built up. In the relations of objects he can touch and move, the child finds the limitations of his powers, the laws that govern phenomena, which his own actions must obey. So long as he deals with realities,
these laws stand in their proper relation. “So simple, so natural, so true,” says Agassiz. “This is the charm of dealing with nature herself. She brings us back to absolute truth so often as we wander.”

There are no reviews yet.